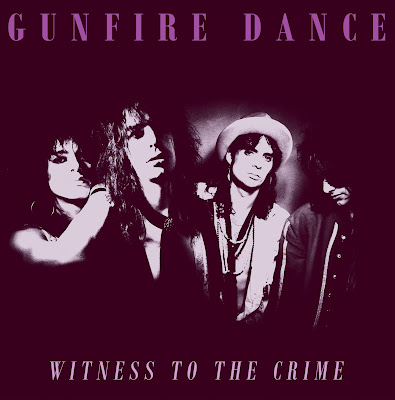 Gunfire Dance seem to be one of those bands who were cursed with really awful timing when it came to emerging on the scene. I know, I know, I say that about a LOT of bands we feature on Garbage Days Revisited but it's especially true of this lot. Looking at some of the endorsements they received during their brief initial run, there's really no way they shouldn't have at least managed to carve out a reasonable run as underground rock 'n' roll legends for a few albums. Their debut single was produced by the Damned duo of Brian James and Rat Scabies. They sold out the Marquee on numerous occasions as well as being taken out on tour by the Dogs D'Amour. When they went to the States, the likes of the Waldos, the Throbs, New York Loose and D Generation welcomed them with open arms as long lost kinsmen. So where on earth did it all go wrong?

Well, like I said at the beginning, bad timing, that's where. The group (Ant, Jeff, Birchy and Ozzie) formed in Birmingham in the late '80s but by the time they'd moved to London and started out making a name for themselves on the live scene, it was 1989-90 and the window of opportunity they'd had for getting signed alongside the likes of the Dogs or the Quireboys had probably been and gone. Similar to the Soho Roses or the Kill City Dragons, they were a great band who just happened to miss the boat by that crucial six months or so. They were also another band who kind of got swept in with the turn-of-the-decade Soho sleaze scene when, truth be told, they didn't really fit in there. While a lot of that crowd were chasing their tails trying to be the next Guns 'n' Roses, Gunfire Dance had a much more raw and rough sound which owed more to the early '70s Detroit sound than '80s LA but very much had their own stamp on it. It says a lot that they were just at home supporting wild-eyed psychedelic freakout merchants Thee Hypnotics* as they were sharing a bill with Tyla and co.

* - Another band we really need to get a GDR done on some time soon. Watch this space.

I mentioned last week how the Soho Roses might just be the unluckiest band of the turn-of-the-'90s Soho scene as they ended up having to self-release all of their stuff while watching all of their contemporaries get signed but Gunfire Dance might just be even unluckier still as they never even reached the album stage with their recorded output at the time consisting of a couple of EP's the material for an album which never saw the light of day. Those tracks briefly surfaced as part of the excellent Archway of Thorns compilation which was available for about five minutes in the late noughties but thankfully, the circle has come around again thanks to Easy Action who've now reissued the album, Witness To The Crime, as it was originally meant to be heard. And, even thirty years later, it ain't bad either.

Kicking in with the full on Iggy style rush of Gunfire Dance's debut single Blue, this is an album that doesn't let up for one second. Bliss Street is a distant cousin of the old Flesh For Lulu classic Vaguely Human, all hyperventilating riffs and snarled vocals. Even this early, you can see that various lazy journos' attempts to crowbar Gunfire Dance in with the Soho scene were definitely a bit misguided - yes, there is the occasional bit of flashy divebomb guitar riffery from Jeff but there the similarity most definitely ends. Tunes like the chugging Bird Doggin' and the gnarly Easy Come (You've Just Gone) are pure Stooges indebted mayhem with a touch of early Damned and a spot of Kick Out The Jams era MC5 thrown in there - definitely not influences you really saw much among the sleaze metal fraternity no matter how much the likes of G'n'R might have wanted to claim those guys as an influence. And it's a surprisingly varied effort as well from the lurching comedown lament of It Hurts through the fired up punk blast of Burnin' Ambition to the almost power-pop Gimme Back My Heart. The nearest similar thing I can think of from around this time is maybe Uncle Sam's excellent Heaven Or Hollywood which had a similar rabid early '70s vibe to it (Gunfire Dance's second single Suit And Tie could arguably be a great lost track from that classic) but even that's a bit of a stretch as they were way more Alice Cooper than Iggy Pop. And even then, Ant might owe a few of his vocal inflexions to Mr Osterberg but the guy definitely had an identity all of his own - proof positive that you can study your heroes all you like but the best music comes from when you add a bit of your own personality into the mix rather than just pretending to be someone else. NWOCR bands, take fucking note. Either way, make no mistake, Gunfire Dance were definitely a wonderfully unique band for this timeframe.

But, like I say, there's the rub - unfortunately people just didn't know what to make of them. They were too heavy for the Stone Roses/My Bloody Valentine/Nirvana worshipping NME/Melody Maker/Sounds crowd but not really heavy enough for the Metallica/Megadeth Kerrang-reading fraternity. They got a few complimentary mentions in all of the above but never quite reached the level of actually getting features written about them and after a few years of banging their heads against the music biz wall unsuccessfully trying to get Witness To The Crime released, they called it a day in 1995, breaking up messily while over in New York for some gigs.

Post-Gunfire Dance, guitarist Jeff Ward would move to the Big Apple to form Electrajet while the others would form the Steppin' Razors who never made it past the demo stage. Drummer Ozzie and bassist Darren Birch would both serve in the 21st century Lords of the New Church line-up which sadly but predictably didn't work without Stiv and since then Birchy has also served with the Waldos on a couple of UK tours they did following Walter Lure's retirement from Wall Street as well as an ill-fated spell with the Godfathers. These days he can be found playing bass with the excellent Black Bombers. Sadly, frontman Ant Bullock would end up taking his own life suddenly in 2006. He'd been dealing with personal demons for a few years before this but everyone involved seems to agree that it seemed like he'd overcome them, even taking a job working in mental health to help those who'd suffered with the same problems, which made his passing even more of a shock.

I was lucky enough to see Gunfire Dance do a one-off reunion gig at the Unicorn in Camden back in 2013 with the group's long time friend Jez Miller of the Men Who Will Not Be Blamed For Nothing and Flesh Tetris (who'd served alongside Birchy and Ozzie in the 21st century Lords, the Brian James Gang and the Waldos) standing in for Ant. It was a good night as they rattled through the likes of Suit And Tie, Blue, Bird Doggin' and a razor-sharp cover of the Damned's Fan Club with nail-on-the-head precision and made you realise just what the world missed by ignoring them first time around.

Anyway, suffice to say that Witness To The Crime comes highly recommended. Go out and give it a listen pronto - this is the story of the London scuzz-rock scene of the early '90s that you've not been told...

Popular posts from this blog

"There ain't no future, there ain't no past, there's just a graveyard and it's comin' up fast..."  - The Dead Boys  - Third Generation Nation Well, here we go, Garbage Days Revisited number 100. While I had a few options I was considering for this, I decided to go with one of my favourite groups that still haven't featured in this column to date - ladies and gentlemen, CBGBs' other unjustly forgotten sons (along with the Dictators who we covered on here many moons ago) - the Dead Boys... We've already encountered Stiv Bators in Garbage Days Revisited's past of course, be that with the awesome Lords of the New Church or his brief stint with the Wanderers but this was where he started out. The Dead Boys were formed in Cleveland in the mid-'70s from the ashes of proto-punks Rocket From The Tombs (the other half of whom, bizarrely, went on to art school post-punk types Pere Ubu - talk about two very different bands!). I said it before
Read more

Another group from the Rum Bar records stable, the Shang Hi-Lo's hail from Boston (obviously) and this album definitely has a bit of a retro feel to it as you would expect, dipping its toe into both garage rock and classic '60s pop. But that's not a problem. Kicking in with the swinging Takes One To Know One  which takes the old rockabilly template and adds a dose of candy floss sweet melodies to it, second track Monsieur Valentine  could almost a great lost Revillos song (maybe with a hint of Kirsty MacColl in there as well) with its girl group style vocal harmonies and retro power pop rhythms. The title track goes into almost '70s disco territory which is...well, okay but it doesn't quite sit as comfortably as the first two tracks did but thankfully the Ronettes-meets-Ramones Plymouth Rock  is on hand to right things afterwards - again, the duelling male and female vocals definitely hark back to Eugene Reynolds and Fay Fife a bit. Billy  has an almost spaghetti
Read more

"Well I know that you think you're a star/But a pill-poppin' jukebox is all that you are"  - Jet  - Rollover DJ Ah, poor old Jet*. There's an old saying along the lines of not building yourself up too much because it just ends with you having further to fall and of all the early noughties garage rock revival bands, you can't help but think of this lot when you say it. For about five minutes, these Aussies hitched a lift on the back of the garage rock revival bandwagon and seemed to be literally everyone's favourite band. Unfortunately once the scene crashed and burned, the ground fell away from beneath their feet incredibly rapidly and they went from critical darlings to a running joke with their name being used for a byword for sub-par bands of this genre. But I'm getting ahead of myself here, let's start at the beginning, shall we?... * - Just to establish from the off that it's the Australian Jet we're talking about here, not the Briti
Read more

Friends of Nite Songs (other sites we recommend)